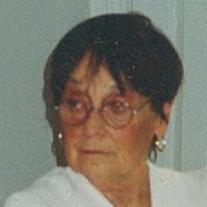 Halle Ann Jaquith Clogston, 85, Overland Park, KS, passed away on October 11, 2014 at Overland Park Nursing and Rehabilitation Center.  Visitation will be from 1-2 p.m., followed by a Memorial Service at 2 p.m. on Saturday, November 1, 2014 at Overland Park Chapel, 8201 Metcalf Avenue, Overland Park.  Inurnment will be at Leavenworth National Cemetery. Memorial contributions may be made to SPCA, 5428 Antioch Drive, Merriam, KS, 66202.
Halle was born April 8, 1929 in Clinton, OK.  She was a legal secretary for many years.  Halle enjoyed the arts with many friends, but first and foremost was a wife and mother with her family being the center of her world.  Jack and Halle were united in marriage in February 1951.  They enjoyed 40 years of traveling, entertaining friends, playing tennis and spending time with their family.
She was preceded in death by her husband, Jack Clogston, and son William David Clogston.  She is survived by:  sisters, Karen Boothe of Carthage, MO, and Lynn (Chuck) Wendelbo of Norman, OK; 2 daughters: Sarah Clogston and Kelli Malone, both of Overland Park, KS; 6 grandsons: Brandon (Itzel) Clogston, Jed Leibbrandt, Taylor Leibbrandt, Jack Malone, Scott (Katie) Malone, and Brett. Malone; 1 great granddaughter, Jaquith; a daughter-in-law Suzan (Dan) Haskins; a niece and two nephews; and many special friends.  Please offer condolences at www.overlandparkchapel.com.

To order memorial trees or send flowers to the family in memory of Halle Clogston, please visit our flower store.