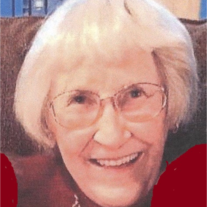 Glannie Wiehe, 91, passed away March 31, 2016.  She was born in Linkoping, Sweden to Josef and Annie Earnest. In 1925, they moved from Sweden to Moose Lake, Minnesota, where Glannie grew up on a farm, attended school in Moose Lake, graduating from high school in 1942. She then, took a pre nursing course at Augsburg College and three year nurse’s training at the Swedish Hospital in Minneapolis, MN. She spent 2 years at North Park Junior College in Chicago, IL taking a Mission’s course and working part time as an R.N. at Swedish Covenant Hospital. She taught vacation Bible school for 3 summers in the Virginia Mountains, Northern Minnesota and Canada, as she continued her nursing career. In 1951, she came to Kansas City, MO and worked as a Parish Worker at the First Covenant Church at 42nd and Terrace St. for 5 years. After that she resumed her nursing career, working at St. Luke’s Hospital about 3 years followed by 7 years at the Knight-Altringer-Bunting ENT Clinic (later named Old Westport Clinic). In 1967, she went to Trinity Lutheran Hospital, where she worked 18 years until retiring in 1985. It was at Trinity that she met her husband, Leonard Wiehe. They were married in 1970 and shared 43 years being happy to have each other. They were members of Hillcrest Covenant Church in Prairie Village, KS where Glannie actively participated in several areas of service including teaching Sunday School, VBS and a women’s Bible study class. She also served as a deaconess and was in charge of the Congregational Care Groups for several years. She was also active in women’s activities and in later years in SAGE (Senior Adults Group). Preceded in death by her husband, Leonard, her parents and 2 younger brothers, Kenneth and Floyd Earnest.

To order memorial trees or send flowers to the family in memory of Glannie Wiehe, please visit our flower store.