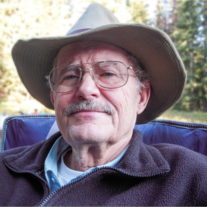 Gil was born in Ponca City, OK on February 2, 1937 to Ernest and Helen Remington Chappell who pre-deceased him. Along with his two younger brothers the family moved to Wichita, KS in 1942 where Gil grew up. He graduated from Wichita High School East and went on to Wichita University (WU). His love for chemistry resulted in undergraduate and Masters degrees in Physical Chemistry from WU. His PhD was earned at the University of Utah in 1965.

After graduation he used his creative mind and talents as a research scientist for Exxon Mobile in Rahway, NJ. After 9 years of employment and longing to return to his midwestern roots, he moved his young family to Overland Park, KS where they now reside. For the next 28 years he served in the lawn service industry as the owner of Lawn Pro. His reputation grew along with respect from his peers, customers, and the Kansas State University faculty.

Gil is survived by his wife of 54 years, Jeanne Kolde Chappell; son, Dr. Glenn Chappell (Joanne) of Fairbanks, AK; daughter, Kendra Baldridge (Josh); grandchildren, Nathaniel and Theresa Chappell and Lily and Max Baldridge; brothers, Van (Judy) and Frank (Linda). Additionally, Gil is survived with the many extended family members and friends from around the world.

His deep Christian faith is not questioned, yet as an inquisitive individual with an extremely brilliant mind, he was filled with many questions. Now Gil will receive answers to his many ponderings. It is said that the tears shed by his loved ones and friends are the angels surrounding him. If so the angels are as numerous as the glittering gems of morning dew on his beloved green grass.

In lieu of flowers, the family suggests donations in his name to his weekly place of worship, the Overland Park Church of the Nazarene. http://www.opnazarene.org.

To order memorial trees or send flowers to the family in memory of Gilford A. Chappell, please visit our flower store.