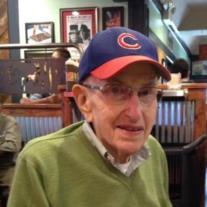 After attending St. Joseph’s grade schools, George graduated from Central High School and St. Joseph Junior College (now Missouri Western State University). In 1939 he graduated from the University of Kansas with a degree in Business Administration. After KU, George began a lifetime association with the painting company his father had organized in 1896. There was one major interruption in that 49-year span: World War II.

George was drafted into the US Army on 7 March 1941, ostensibly for one year. Pearl Harbor, 7 December 1941, obliterated that limited time of service.  George’s army service continued for five years until his honorable discharge in 1946.

Assigned to the ordnance department, George served in Ft. Sill, OK, Ft. Francis E. Warren, WY and Ft. Lewis, WA. While at Ft. Lewis, he was selected for officer training school. Upon completion of that course, he was assigned to the ordnance battalion in which he served at Ft. Lewis and eventually was given command of the company in which he had served as an enlisted man.  Upon the activation of the 176th Ordinance Depot Company, George was assigned as commanding officer and remained in that capacity until his separation from the service.

The 176th served about 2 ½ years in the European campaign, going from England to France to Belgium to Holland and to Germany. During that time the 176th was awarded five campaign stars and the Meritorious Service Award.  George received the Bronze Star Medal.

Upon his release from active duty in 1946, George returned to his peacetime job. Following his father’s death in 1947, George assumed management of the company and remained in that position until his retirement in 1988.

In St. Joseph, George was an active member of Westminster Presbyterian Church where he served as an Elder. He also served a term as moderator of St. Joseph Presbytery.  During his years in St. Joseph he was president of the Building Industry Club, St. Joseph Country Club and St. Joseph United Way.

George and Anita Mitchell Teegarden were married 29 June 1957 and shared 41 years of happiness until her death in 1998.

George and Anita moved to Overland Park, KS in 1988. At his daughter Julie’s urging, George became active in SCORE (Service Corps of Retired Executives) where he counseled start-up business owners.  George also mentored aspiring students seeking a GED and tutored students in the Shawnee Mission and Kansas City, Missouri school districts.  He volunteered in Project Finish working primarily with immigrants learning the English language and seeking to become American citizens.  Two of his students achieved that goal of citizenship.  George loved to tell the stories of those two, both escaping communist-dominated countries, one from Vietnam and the other from Eritrea.

A memorial service will be held at Village Presbyterian Church on May 23 at 1:00 pm.  In lieu of flowers, the family requests donations to Kansas City Hospice House or Kansas City Rescue Mission.  Condolences can be sent to the Family of George A. Thompson, c/o Overland Park Chapel, 8201 Metcalf Ave., Shawnee Mission, KS  66204 or at www.overlandparkchapel.com.

To order memorial trees or send flowers to the family in memory of George Thompson, Jr., please visit our flower store.