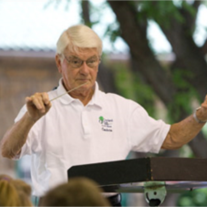 Frank W. Fendorf, passed away peacefully on June 2, 2016 at St. Luke’s Hospital on the Plaza with his son, Fred, at his side. A memorial service will be at 4:00 pm Thursday, June 9th held at St. Thomas the Apostle Episcopal Church, 12251 Antioch Road, Overland Park, Kansas 66213. His ashes will be inurned next to his wife, Barbara in the rose garden Columbarium outside the church. A reception celebrating his life will be held in the parish hall immediately after. In lieu of flowers, the family suggests memorial contributions to the St. Thomas the Apostle Episcopal choir and organ fund.
The son of Frank E. and Icie Fendorf, Frank was born January 16, 1925 in Tuscumbia, Missouri - one of seven children. He graduated from Eldon High School in 1943 as the Best All Around Student and with a full scholarship he earned his Bachelors of Music Education from the University of Central Missouri in 1947. While a student there he was the second person ever to receive the Charno Award, given to the outstanding student of the graduating class. He received his Masters in Music Education from the University of Kansas. Frank served in the National Guard for three years, where he met and married Barbara Brassfield, the daughter of his commanding officer. They had one son, Fred in 1951. After being honorably discharged he taught music in Warrensburg, Missouri before becoming the band director for the Chillicothe, Missouri Public Schools. He held that post until 1965 when he accepted an offer of partnership in the firm of Wingert-Jones Music, a retail sheet music distributor and music publisher in Kansas City, Mo. During his time with Wingert-Jones he was involved in selecting music for sales, publication and marketing. He eventually became vice-president of the firm. He was a member of many music industry organizations including the National Association of Music Merchants, Missouri Music Educators Association, Missouri and Kansas Bandmasters Associations, National Bandmasters Association and the Retail Print Music Dealers Association, of which he was president in 1984. He is the only person to be named an Honorary Associate of the American Bandmasters Association. He is a member of the Missouri Bandmasters Association Hall of Fame (2001). In 2013 he was honored with the Distinguished Award for Service by the University of Central Missouri. He and Barbara founded two scholarships to the music school there.

Frank remained a performing musician his entire life, playing in jazz bands, brass choirs, the UCM Alumni band, the American Legion band and the Overland Park Civic Band, of which he was the director for 41 years. He was choir director for St. Thomas the Apostle Episcopal Church in Overland Park. In 2013, at the age of 88, he was recognized at the Kauffman Center for the Performing Arts as the oldest performer in Tuba Christmas, playing along side his oldest grandson, Derek Fendorf.

In addition to his musical abilities Frank was a gifted woodworker and loved to work with his hands, finishing the shell of the house he and Barbara bought by himself. He loved gardening, bird-watching, fishing and was an avid boater. He and Barbara enjoyed their house at the Lake of the Ozarks for many years and loved their trips to Captiva Island every January.

Frank was preceded in death by his brothers Fred, Dale and Jim Fendorf. He is survived by his son Fred, daughter-in-law Debbie and two grandsons, Derek and Mitchell Fendorf, all of Overland Park. He is also survived by his sisters Carolyn Fendorf, Marilyn Gunderman, and brother Kenneth Fendorf.
To order memorial trees or send flowers to the family in memory of Frank Fendorf, please visit our flower store.