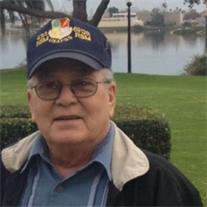 He was born on July 1, 1940 to Anselm and Minnie Irlbeck in Auburn, IA. He graduated from Manning Highschool in Manning, IA, he went on to the University of Nebraska of Omaha where he received his bachelor's degree in accounting.

He was very involved in the American Legions Post 370 and the Honor Guard Post 370 of Overland Park.

He enjoyed fishing, playing cards and watching Nebraska Huskers Football, Chief's Football, KU Basketball and Royals baseball.
He is preceded in death by his parents.

Memorial service will be at 1 p.m. on Tuesday May 6, 2014 at the Overland Park Chapel, 8201 Metcalf Overland Park, KS 66204. There will be a celebration of life following the service at American Legion Post 370.

In lieu of flowers the family suggests memorial contributions to the American Legion Post 370 – Honor Guard or the Kansas City Hospice House.
To order memorial trees or send flowers to the family in memory of Floyd Irlbeck, please visit our flower store.