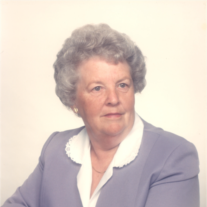 Faye Crawford, age 93, of Overland Park, Kansas, passed away due to natural causes on April 12, 2016, at Bickford Assisted Living.

Visitation will be from 6 to 8 pm on Thursday, April 14th, at Overland Park Funeral Chapel.  Burial will be in the National Cemetery in Springfield, Missouri on Friday, April 15th at 1 pm.

Memorial contributions may be made to the American Cancer Society.

Mrs. Faye Crawford was born on the seventeenth of June in 1922 in Trail, Missouri.  She grew up in southern Missouri.  As a young woman, she worked as a waitress and made wonderful pies, which attracted her soon-to-be husband, John Austin Crawford.  They were married in 1946, and they lived in Missouri, Alaska, and Illinois before settling in Kansas in the late 1950s.  Although she had jobs as a waitress and in a school cafeteria, she was primarily a homemaker and stay-at-home mom to her two children.  Faye loved to cook and garden.  She remained in her home for 55 years before moving into assisted living, where she was cared for by many wonderful people.  She loved Tiger Woods, George Jones, Conway Twitty, and Dr. Oz (“He’s a real doctor, you know”).  She passed away exactly one year after her only son, Ross.

She was preceded in death by her parents, Lum and Dora Hall; her husband, John Austin Crawford; her son, Ross Atkinson; her older sister, Marcella Gates; and her two brothers, Clark and Claude Hall.

Your browser does not support this video format. You should be able to view it in Chrome, Safari or Internet Explorer.
To order memorial trees or send flowers to the family in memory of Faye Crawford, please visit our flower store.