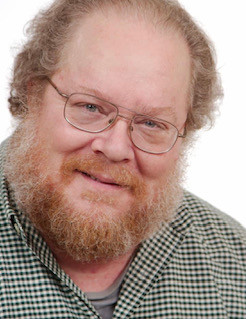 Ernest (Ernie) Leroy Williams was born in Independence, Missouri, on October 7, 1956, as the last of Franklin and Esther Williams seven children. He died on August 28, 2022, at the Menorah Medical Center, Overland Park, Kansas.

Ernie launched his life in the theater at an early age, entertaining neighborhood kids with various pageants of his own creation. At Lamoni High School in Iowa, he wrote and produced plays.  He attended Graceland College for several years and transferred to Park College where he graduated with a bachelor of arts degree.  Later, he received a masters in theater from the University of Missouri at Kansas City.

His love of theater lasted a lifetime.  He directed plays at theaters in Independence, Atchison, Liberty and Kansas City.  He cultivated area playwrights and performers.   One of his greatest joys was helming a production and bringing it to life.

In lieu of flowers, donations can be made in Ernie’s name to:

To order memorial trees or send flowers to the family in memory of Ernest "Ernie" Williams, please visit our flower store.