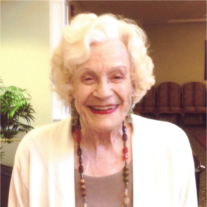 Elizabeth (Betty) Quinlan, of Overland Park, KS, passed away on May 22, 2016. Born Elizabeth Upjohn in Rib Lake, Wisconsin, November 4, 1920, Betty was the youngest of three children of James and Mary Upjohn. Betty graduated from the University of Wisconsin with a B.S. degree in Dietetics. She served a year’s internship in Grasslands Hospital, White Plains, New York. Immediately after her internship she joined the U.S. Army in World War II as a dietitian in the Nurse Corp and served in a town outside of Paris.
Back home she worked at a hospital in Long Island, New York. From there she moved to Chicago, Illinois. She received her Master’s degree in Foods and Nutrition at Illinois Institute of Technology. While in Chicago she worked at the Michael Reese Hospital, a Jewish hospital. Miss Kahn, the head of the dietary department was just hired and she was in the process of hiring dieticians, she was the only executive that secured dietitians to receive a month’s vacation and paid them the highest salary in the city. Betty was given the task to operate the Meyer House, the elite food service of the hospital. Betty worked about seven years at Michael Reese. Then she heard about a study, a Heart Disease Control Program from the Heart Disease Institute. The same study was to be done in five different cities, Chicago was one of them. It was a research program on saturated and unsaturated fats and what effect they had on the heart. In Chicago the study was to coordinate with the Chicago Board of Health. It was the first time that dietitians were able to develop weekly and monthly menus for patients in the hospital. Betty enjoyed working on that study.
Betty was a member of The American Dietetic Association and the Illinois Dietetic Association, of which she was president for one year. Betty was a member of the 4th Presbyterian Church in Chicago, where she was a deacon and also the president of the Highlanders (a young people’s group) for three years. The last job in her dietetic career was a traveling dietary consultant which involved traveling through five states in the Midwest, one of them being, Kansas City, Missouri. It was in Kansas City that Betty met a former army friend, Frank Quinlan, who had become a widower, where they renewed their friendship. They married in Chicago, and moved to Mission, Kansas. Frank was president of the Frank Quinlan Construction Company, and later president of Waco Retail Sales of construction equipment. Betty inherited four wonderful step-children, and 14 step-grandchildren.
Betty transferred her membership from Chicago to the Village Presbyterian Church, and became active there. Betty volunteered delivering Meals on Wheels. She was interested in the arts, and worked on the information desk of the Nelson Atkins Art Gallery for several years. Her hobbies were: enjoying the performing arts, golf (even though she couldn’t hit the ball), playing bridge, and traveling, and watching football. Betty also enjoyed and loved bible studies that she was involved in at Park Meadows.
Betty leaves one niece, step-children, step-grandchildren, friends, and staff at Park Meadows. The family gives special thanks to Vitas Innovative Hospice Care for their loving, caring treatment of Betty during her final weeks. Betty’s Celebration of Life will be on Sunday afternoon, June 12th from 2:00-4:00pm at Park Meadows, 5901 West 107th Street, Overland Park, KS 66207.  Please offer condolences at www.overlandparkchapel.com.

Your browser does not support this video format. You should be able to view it in Chrome, Safari or Internet Explorer.
To order memorial trees or send flowers to the family in memory of Elizabeth G. Quinlan, please visit our flower store.