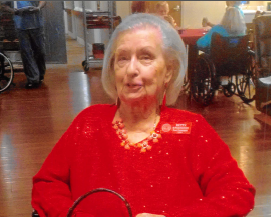 Betty was born in Marionville, MO to Frank E. and Jane Marshall. After moving to Kansas City, MO, she attended Westport High School, where she graduated with honors. Her first job as a career woman was with Hereford Journal Publishing. She later married Mike Ergovich and they raised their family in the Kansas City area. Betty retired from Western Missouri Health Center on Hospital Hill after many years and was involved in setting up the first methadone clinic in Kansas.

In 1987, Betty unselfishly accepted the role of mother, father, mentor and greatest grandmother. She raised her only grandson, Coleman Marshall following the death of her daughter, Nicola Ergovich.  Betty was a history buff and served as president of the CIVIL WAR ROUND TABLE OF KC for several years. She served on the board of Kansas City Posse of the Westerner and becoming one of the very few women Sheriffs of the organization. She also served on the board of Westport Historical Society and Harris-Kearney Historical House. Betty and Coleman enjoyed traveling to the area Civil War Battlefields where Coleman was a cadet reenactor and she loved it. She never stopped learning. When she wasn’t dragging her grandson to all of her meetings, she was attending history and writing classes at KU and later, at JOCO.

In 2016, Betty had a stroke and later resulted to dementia.  She was lucky enough to make her home at Villa St. Francis. Despite the dementia, Betty remained “adorable”. Her sense of humor never left us and she remained cheerful in her own mind.

Betty is survived by her children, Phyllis Ergovich-Marshall of Overland Park, KS and Phillip Ergovich of Kansas City, MO and her grandson, Coleman Marshall of Merriam, KS.

The family would like to express their special thanks to the angels from Catholic Hospice. We cannot express our deepest love for Betty’s special angel, Stella Ojiaka at VSF for her love, care and dedication to our Mother.

To order memorial trees or send flowers to the family in memory of Elizabeth Ergovich, please visit our flower store.