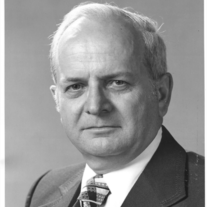 Dr. Eldon J. Parizek, educator and former UMKC college dean, passed away in Wichita, Kansas on June 11, 2016 at the home of his youngest daughter, Amy Law.  Mass of Christian Burial will be held 11:00 a.m., June 17 at the Church of the Holy Cross, 8311 W. 93rd St., Overland Park, KS. Rosary will begin at 9:45 a.m., followed by Visitation from 10:00 – 11:00 a.m.  Burial will be in Resurrection Cemetery in Lenexa, KS.  Memorial contributions may be made to the church.  Please offer condolences at www.overlandparkchapel.com.
Dr.  Parizek was born April 30, 1920, in Iowa City, Iowa, the son of Libby and William Parizek.  Eldon was preceded in death by his parents, his beloved wife Mildred, and his brother, Vernon.    He is survived  by his sister Eunice O’Connor  of  Lacrosse, Wisconsin as well as four children and their spouses:  Richard and wife Louise Parizek of  Lenexa, KS,  Marianne and husband Tom Powell of Ypsilanti, MI,  Elizabeth and husband David Henson of Independence, MO,  Amy and husband Greg Law of Wichita, KS.   Also surviving are grandchildren Richard J. Parizek and wife Brandi of Shawnee, KS, Erika and husband Bryan Atkins of Kansas City, MO, Megan and husband Tony Zarembski of Ann Arbor, MI, Molly and husband Dylan Couch of Mission, KS, Nathan Law and wife, Kaitlyn of Fort Benning, GA, Seth Law of Wichita, KS, Ben Powell of Ypsilanti, MI, Christopher Henson and Mark Henson of Independence, MO, Clayton and wife Annie Law of Duluth, MN, and Ryan Law of Blackhawk, CO.   Ten great grandchildren survive Dr. Parizek.
In his youth, Eldon was a scholar, an athlete, as well as being musically inclined. He attended Iowa City High School, where he played football, baseball, and basketball and was named an Allstate running back in 1938.  He was also awarded music honors as a trumpet player in state and national contests held throughout the state of Iowa in 1937 and 1938.
Eldon entered the University of Iowa as a science major, obtaining his undergraduate degree in 1942.   While at the university, he became a member of both the University concert and marching bands.   In 1942, the University was the site of one of four Naval Pre-Flight Schools established in the United States.  The pre-flight school had a Naval Band and Eldon was selected along with musicians from various U.S. Symphony orchestras as one of five trumpet players in a 45 piece Naval Band which was sent to Washington, D.C.   While in Washington, Eldon became part of a new 30 piece Admirals Band for the Pacific Sea Frontier, which played throughout the Pacific theatre during the latter years of the war.
Following the war, Eldon re-entered the University of Iowa to begin graduate studies, receiving his MS in 1947 and his PhD in 1949 in Geological Sciences.   He accepted a position as Assistant Professor of Geology at the University of Georgia, remaining there for seven years.   In 1954, he was promoted to Associate Professor.  During the summers he did geologic mapping in north Georgia, publishing 11 research papers in various national science journals.  In 1956, Eldon accepted a position as Associate Professor of Geology at the then University of Kansas City.  He taught at what later became UMKC for 20 years, eventually becoming department chairman. In 1964 he led a group of 30 science teachers from the United States on a ten week science trip around the world via ship, air and bus, traveling to Hawaii, Japan, the Philippines, Singapore, Burma, India, Yemen, Egypt, Greece, Italy, Germany, France and the British Isles.
At UMKC, he was active in geologic field work in northwest Missouri – work which resulted in over 50 research publications and over 75 presentations at national and international geologic meetings.  He received the Standard Oil Undergraduate Teaching Award in 1968, helped establish a Geology Museum, and served as a judge at the KC Science fair for 25 years.
In 1979 he was named Dean of the College of Arts and Sciences, a position he held until his retirement in 1985.   During his tenure as Dean, he instituted a number of programs still in effect including an Honors program, the Program for Adult Continuing Education (PACE), and the High School/College Credit Program.   The latter two programs helped to make college work more accessible to an urban population.
Following retirement, Eldon remained in Overland Park for the next 29 years.   He and his beloved wife Mildred were part of the Sunshine Club at Holy Cross Parish and were regular volunteers at St. Mary’s Food Kitchen in Kansas City, Kansas.  As Mildred's Parkinson's Disease worsened, Eldon helped care for her until 2014 when, at the age of 94, he experienced a series of severe falls at his home.  Following these accidents, Eldon and Mildred were both moved to Wichita where they resided and were lovingly cared for at the home of his youngest daughter, Amy Law. They lived together in Wichita for nearly two years. They had celebrated their 71st wedding anniversary last August. Mildred passed away January 2, 2016.


To order memorial trees or send flowers to the family in memory of Eldon Parizek, please visit our flower store.