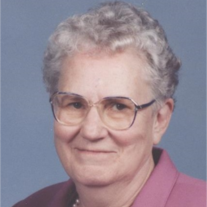 Eileen Eddy Taylor, 86, Leavenworth, KS, passed away peacefully, surrounded by her family, on January 23, 2016.  Eileen was born in Centerville, KS on February 10, 1929, to Arthur and Edna (Burris) Holloman.  She graduated from high school in May of 1947 and married her sweetheart, Oran Terryl Eddy, Jr., the next week.  In April one year later, they welcomed their first son, Oran Lee.  The next year in August she had another boy, Arthur Dale.  Two years later their third son, Robert William, was born in December.  They moved to Kansas City in 1952.  Finally their daughter, Deborah Eileen, was born in January of 1956.

Terryl was killed in a car accident in December of 1957.  Eileen continued to honor his legacy tending to her four small children alone.  She moved the family to the city and joined Olivet Baptist Church where she was a faithful member for the next 58 years.  Olivet has honored her twice for being an outstanding mother, with their Mother of the Year Award.  In fact, they honored her with the award a few years before they started to make it an annual tradition.  The PTA at Frank Rushton Elementary School and Rosedale Jr. and Sr. High also awarded her a lifetime membership for her constant involvement and dedication to her children's education.  Her sweet, quiet spirit earned her the love and respect of all who knew her.

In 1979 she remarried to Harold Taylor and retired from Hallmark Cards where she had worked for five years.  She enjoyed very much having more time to spend with her family and friends, and more time to volunteer at the church.

She also enjoyed her large garden and spent every harvest time canning and preserving food she had lovingly grown herself.  Her salsa recipe was a favorite of her grandchildren and remains the only recipe many of them will use to this day.  Never to be found idle, even when she sat down to rest, her hands took up her knitting needles and crochet hook.  One year she crocheted nine afghans for her nine grandchildren between September and December so she could give them to her grandchildren for Christmas.  Those afghans are still treasured by her grandkids.  Up until Alzheimer’s robbed her of the ability she continued to make blankets for her great-grandchildren as well.

Knowing she was joyfully welcomed at the gates of heaven by her loved ones who preceded her in death is a great comfort to those she left behind.  Even as she was preparing for death, she was happily anticipating seeing her two husbands, granddaughter Sarah, son Dale, and son-in-law Terry Wilbur, again.  We love and miss her, and cannot wait for the day when we will be reunited with her once again.

To order memorial trees or send flowers to the family in memory of Eileen Taylor, please visit our flower store.