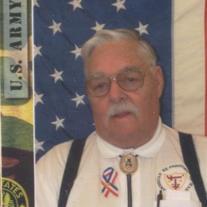 Donald R. Boyer, 90, passed away November 21, 2015.  Don was born November 1, 1925 in Kansas City, MO, and attended school in Platte City, MO. He retired in 1989 after 27 years with Chrysler Corporation as Zone Real Estate Manager.  A veteran of World War II, Don was a prisoner of war in Germany, having been captured in the Battle of the Bulge, was wounded and awarded the Purple Heart. Don was Past Commander of American Legion Post # 370, past Second District Commander, past Chef de Gare of the 40 & 8, trustee of the Veterans of Foreign Wars Post # 846 and was serving as Chapter Commander of the Heart of America Chapter of the Missouri Department Americans Ex-Prisoners of War.
Visitation will be 1-2 pm, Saturday, November 28, followed by a tribute by 40 & 8, and a Celebration of his Life at Overland Park Chapel, 8201 Metcalf Avenue, Overland Park, KS.  In lieu of flowers, memorial contributions may be made to Dwight Cowles American Legion Post # 370 or to KCMO VA Hospice.  Inurnment will take place at a later date at Leavenworth National Cemetery.
He is survived by:  his wife of 55 years, Dorothy (Bonnie); their children, Karen of Honolulu, HI, Kevin and wife Jeanne of Lenexa, KS, and Christopher and wife Janie of New Orleans, LA.  Donald also had a son from a previous marriage, Ronald of Overland Park, KS.  He is also survived by a sister, Beverly Fawks of Tulsa, OK, numerous grandchildren and great grandchildren.  Please offer condolences at www.overlandparkchapel.com.

Please click here to view the video tribute
To order memorial trees or send flowers to the family in memory of Donald Boyer, please visit our flower store.