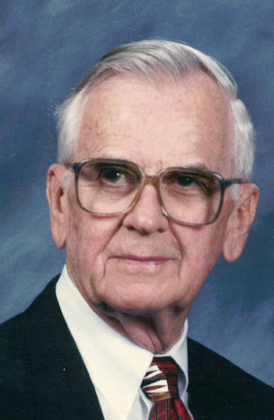 Dillard E. Whitlow, 98, passed away December 27, 2018. He was born in Haviland, KS, on March 2, 1920. He grew up on a farm there and attended Haviland High School, where he lettered in three sports. After graduating from Chillicothe (MO) Business College, he began work with Contractors Machinery Company (CONMACO) in Kansas City, KS, but left to serve in the Army Air Corps during World War II.  While stationed at Keesler Air Base in Biloxi, MS, he met his wife of 65 years, Ethleen Dillard. A favorite story was how their common name led to their marriage. At the end of the war, he returned to CONMACO, where he continued to work for 56 years, retiring as a vice president.

Dillard was a long-time member of the Village Presbyterian Church, serving as a deacon and an usher. He was a member and past president of the Kansas City Breakfast Club. He was also an active member of the Old Mission Lodge #153, the Scottish Rite, the Abdullah Shrine Greeters Unit, and the Leawood Shrine Club.

He is survived by his daughter Karen Whitlow and son-in-law, John Neal. He was preceded in death by his wife, Ethleen; his daughter Nancy Whitlow; and his sisters Gwendolyn Wiles and Geraldine Charles. In lieu of flowers, memorial contributions can be made to the Village Presbyterian Church or the Alzheimer’s Association – Heart of America chapter.

To order memorial trees or send flowers to the family in memory of Dillard Whitlow, please visit our flower store.