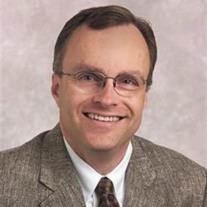 David Mark Stubbs, 57, Overland Park, KS passed away October 16, 2015.  Funeral services will be 1pm, Saturday, October 24 at The United Methodist Church of the Resurrection, 13720 Roe Avenue, Leawood, KS, with burial to follow at Shawnee Mission Memory Gardens in Shawnee, KS.  Visitation will be from 11am until 12:30 pm at the church prior to service.  Memorial contributions may be made to American Diabetes Association or the American Lung Cancer Association.
Mark was born September 29, 1958, in Newton, KS to parents Dr. David W. and Janet (White) Stubbs.  He graduated from Washburn University with an undergraduate in Business Administration and later earned his Master’s Degree in communications from Wayne State University.  In his early years, he worked at WREN Radio broadcasting sports for Washburn University.  He then served as a Shawnee County Sheriff’s Deputy Reserve officer and also as the Captain of the Bel Aire Police Department.  Following his law enforcement career, he held the executive Regional Director positions with the American Diabetes Association.  He was currently working for the Shawnee Mission Medical Center Security Department as well as an officer with the Louisburg Police Department.  Over the past several years, Mark had volunteered with multiple organizations but was most proud of his work with the United Methodist Church of the Resurrection and the Kansas City Chief’s Red Coaters.
Mark was preceded in death by:  his wife, Julie A. Jamison-Stubbs; his father, Dr. David W. Stubbs; his brother, Greg A. Stubbs.  He is survived by:  his son, Jordan P. Stubbs of Overland Park; his mother and stepfather, Janet J. Stubbs-Kufahl and Wayne D. Kufahl of Topeka, KS; his brother, Bruce (Sinda) Stubbs of Wichita, KS and their children, Blake Stubbs, Skylar and Shane Berger; step brother, Wayne Robert (Kathy) Kufahl and their children of Wamego, KS; step sister, Tonya (John) Dick and their children of Enid, OK; step children, Erin and Andrew Johnson and their son Ronan of Oakland, and Andy and Brooke Jamison of Wichita, KS;  and many nieces, nephews and cousins.  Please offer condolences at www.overlandparkchapel.com.

Your browser does not support this video format. You should be able to view it in Chrome, Safari or Internet Explorer.
To order memorial trees or send flowers to the family in memory of David Stubbs, please visit our flower store.