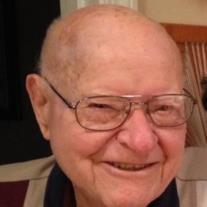 
Dale M. ”Pidge” Warden, 91, passed away early Monday morning January 19 with his wife of 65 yrs. lying beside him and surrounded by his daughters, son-in-laws, and 2 grandchildren. Pidge was born in Kismet, KS on January 27, 1923 to Gene and Iona Fellers Warden.  He grew up in Liberal, KS graduating high school in 1941. He married Billie Marie Tobias on August 14, 1949 and they lived in Liberal until 1981 when they moved to CO. Pidge worked for Panhandle Eastern Pipeline Company for 40 yrs. in both the Liberal and Brighton, CO offices retiring in 1985. Pidge was a Marine Corps veteran serving in both WW2 and the Korean War.  He and Billie moved to the KC area in 1990 living at Lakeview Village Retirement since 2007.  Pidge was a member of Overland Park Christian Church, Overland Park Lions Club, Abdallah Shrine Temple, American Legion and Masonic Lodge in Liberal. He was preceded in death by his parents, 3 brothers, and 4 sisters. He is survived by wife Billie, daughters Sheila (Don) Cohenour, Alicia (Greg) Bird, grandchildren Jocelyn, Jessica, and Justin Cohenour, Telzey (Darin) Jantzen, Andrew (Jennifer) Bird and great-grandchildren Daylin and Rylan Jantzen, and Abigail Bird, and sister Genie Warden Bruce. Visitation will be Monday, January 26, at Overland Park Christian Church, 75th and Conser, from 9-11:00 a.m. with funeral service to follow. On Wednesday, January 28, a visitation will be held from 9-10 a.m. at First Christian Church in Liberal, KS, followed by a Masonic Service at 10 a.m. Burial with military honors will be at Liberal City Cemetery.  Memorials may be made to Overland Park Christian Church, Liberal First Christian Church, Lakeview Village Good Samaritan Fund, and Parkinson’s Foundation. Please offer condolences at www.overlandparkchapel.com.


To order memorial trees or send flowers to the family in memory of Dale M. Warden, please visit our flower store.