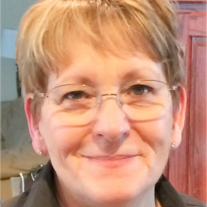 Christine Moon Hyde, 68, of Olathe, Kansas, passed away peacefully on June 23rd at the Olathe Hospice House in Olathe, KS, her loving family was by her side. Chris had been a 10-year breast cancer survivor.
She was born on the 5th of March 1948 in Des Moines, Iowa, the daughter of Robert Hanes Crawford and Gloria Sharman Moon. She lived in Des Moines for a short period of time before moving to Prairie Village, Kansas. She initially attended Notre Dame de Sion and St. Anne’s schools before graduating from Tomahawk Grade School. She attended Broadmoor Junior High School and graduated from Shawnee Mission West High School in 1965.
In the Fall of 1965 Chris attended Oklahoma State University in Stillwater, Oklahoma. Following her Sophomore year at OSU she enrolled at the University of Kansas in Lawrence in the Physical Therapy program. She graduated with a B.Sc. in Physical Therapy in August of 1969.
While serving a clinical at Wadsworth Veterans Administration in Leavenworth in March of 1969, Chris met Robert Hyde, also a Physical Therapist, and were later married in September of 1969. Soon after, in 1970, they moved to Chillicothe, Missouri where they both worked as Physical Therapists.  Chris then took 10 years off to have 5 wonderful children before returning to work part-time in 1981. In 1989, the family moved to Wichita Falls, Texas where she served as a Home Health PT with Bethania Regional Health Care Center while her husband was the Director of Rehabilitation. After the death of both of their fathers in 1994, they moved to Olathe in 1995.
Beginning in 2002, Chris retired from Physical Therapy and began working for the United States Postal Service as a letter carrier in Olathe. She retired in December of 2012. During retirement she enrolled in the Pharmacy Technician School at Johnson County Community College and received her Diploma in 2013 and was licensed in Kansas and Missouri. Additionally, in retirement Chris belonged to the Kansas Brass Bell Choir and was a volunteer for Johnson County Interfaith Hospitality Network (IHN) in Overland Park. She worked alongside her husband as a temple worker in the Kansas City Missouri LDS Temple, and as a volunteer in the Bishop’s Storehouse in Independence, MO.
She was a member of The Church of Jesus Christ of Latter-day Saints and served in various positions within the church.
Besides her husband Bob, she leaves a son, Eric Hyde (Sarah) of Basehor, KS; and daughters, Angela Knight (Scott), Olathe; Emily Romo (Scott), Gardner; Laura Ismert (Brian), Topeka; and Gina Sweeney (Orin), Shawnee; her mother Gloria Crawford of Prairie Village; a brother, Scott Crawford (Johnie) of Cedar Rapids, Iowa and sister, Sharman O’Grady (Pat) of Shawnee and 17 grandchildren. She touched the lives of many people and her presence will be greatly missed.
Visitation will be held Sunday, June 26th from 5-7 p.m. at the Overland Park Chapel located at 8201 Metcalf in Overland Park, KS.  Another visitation will be held before the 10:00 am funeral on Monday, June 27th from 9:00 -9:45 a.m. at The Church of Jesus Christ of Latter Day Saints located at 15915 W 143rd St., Olathe, Kansas.
In lieu of flowers, Christine had requested that donations be made to the Johnson County Interfaith Hospitality Network (IHN). This is an organization that she loved and served happily. Her family would also like you to consider donating to The Hospice House of Olathe, Kansas. They made her final days with us beautiful.

To order memorial trees or send flowers to the family in memory of Christine Hyde, please visit our flower store.