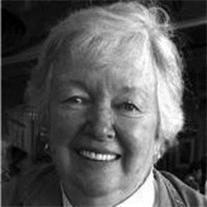 Carolyn Fruit Neptune, 71, passed away March 18, 2014 at home. Carolyn grew up in Edwardsville, IL and lived in Prairie Village, KS for 47 years.
She received a BA and MA from Purdue University, where she met and married Harold Neptune in 1965. They enjoyed many decades of love, laughter, and adventures together.
In 1977, Carolyn began teaching math at Johnson County Community College, launching a wonderful career in which she combined her passion for math with a passion for teaching students.
She genuinely relished the opportunity to help students make sense of math concepts, and she enjoyed that the College included students of all ages and backgrounds.
In 1994, she was named the Outstanding Community College Instructor in the U.S. by the Association of Community College Trustees.
That same year, she was named the Kansas Professor of the Year by the Carnegie Foundation. Carolyn served on the national board for the American Mathematical Association of Two Year Colleges and received a Teaching Excellence Award from them in 2005. She also co-authored several algebra textbooks.
Carolyn retired from Johnson County Community College in 2006 but remained a Professor Emeritus and is featured on their Wall of Honor. She and several others started the JCCC retiree association and she served as its first president from 2010-2013.
Her association with the College and her engagement with her colleagues was a source of great satisfaction. Teaching was a profession where her commitment to excellence, her generosity, and her joy were beautifully expressed.
Carolyn also loved serving her church. Over the years, she was a Sunday School teacher, reader, member of the board, and enthusiastic pianist for Sixth Church of Christ, Scientist in Kansas City, MO. More recently, she and Harold were members of the Overland Park Church.
All who knew Carolyn knew of her love for college basketball and for travel. Combining the two meant that she attended 18 Final Four tournaments wherever they were held each year, cheering for the KU Jayhawks whenever possible. Carolyn also consulted for the NCAA, providing analysis which was used to modify the RPI rankings still used today.
Carolyn and Harold travelled the country and the world together. They loved Hawaii and made multiple trips there, including just last month. Notable other adventures included seeing the tulips in Holland, a trip last fall to the Far East, cruises to distant lands with friends, and travel to Australia and New Zealand, the Caribbean, and Alaska.
Many travels were to visit family, especially Boston, where she visited her daughter Jill Neptune Bicks, her son-in-law Ned, and her grandchildren Will and Kate.
She was also a frequent visitor to Denver where she visited her son Steven Neptune, her daughter-in-law Lydia, and her grandsons Peter and Matthew. Her trips to Houston enabled her to visit her late brother Bill Fruit and his wife Jane.
She was loved and appreciated by many people within her wide circle of friends and family, including many who weren't officially family but felt as though they were.
In accordance with her wishes, no services will be held. Remembrances of her are welcomed by the family. Donations in her honor are suggested to either the Johnson County Community College Foundation, earmarked for the Carolyn Neptune endowment, at 12345 College Boulevard, Overland Park KS 66210 or to First Church of Christ, Scientist Overland Park at 6401 W 87th St, Overland Park KS 66212.
Fond memories and condolences for the family may be left at www.overlandparkchapel.com
(Arrangements by D.W. Newcomer's Sons Overland Park Chapel, 8201 Metcalf Ave., Overland Park, KS 66204, 913-648-6224)
To order memorial trees or send flowers to the family in memory of Carolyn Neptune, please visit our flower store.