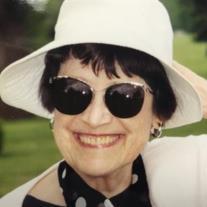 Carol Ruth Wineinger Powell M. D. passed away Wednesday, November 4th, 2015 surrounded by her family. Dr. Powell was born December 15th, 1925 in Garden City, KS. Carol spent most of her childhood with her mother, Clara Anderson Wineinger, and brother, John Harold, in Dighton, KS. Her father, William Wesley Wineinger M.D., was murdered in 1928 by the bank robbing Fleagle Gang, one of the first cases to use fingerprint forensics to solve a crime. After the loss of her father, Carol and her family often visited with her Aunt Mildred (Mid) and Uncle James Earl Brown of Garland, KS. Carol graduated from the University of Kansas and the University of Kansas School of Medicine (Class of 1951). While attending KU, Carol met the love of her life and husband of 64 years Kenneth A. Powell M.D. The duo married on November 22, 1950, and had two daughters, Gail (1959) and Leigh (1961). The family lived in Leavenworth, KS, but after Carol was diagnosed with Lupus the family moved to Leawood, KS where Ken and Carol lived happily for 50 years. In the 1970s Carol began practicing Psychiatry again. Carol cared deeply about the well-being of her patients, and greatly enjoyed being a physician. Ken and Carol traveled often to Nebraska, New Mexico, Arizona, and California. One anniversary they traveled to Europe on the QE II and flew back on the Concord. In 1993, Ken and Carol welcomed their only grandchild, a girl, Rian Alissa Ray; to whom she was always close. Carol retired from her home office in 2005 and spent the last decade surrounded by her family which was always her top priority.
She is survived by her husband, two daughters, a granddaughter, four nephews, one niece and many relatives of her father's sister.


Your browser does not support this video format. You should be able to view it in Chrome, Safari or Internet Explorer.
To order memorial trees or send flowers to the family in memory of Carol Ruth Powell, M.D., please visit our flower store.