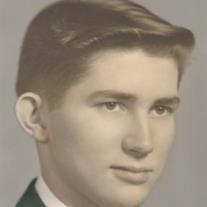 1933 - 2015
Overland Park – Boyd Evans, 82, our beloved husband, father, grandfather, great-grandfather, and friend, passed away peacefully on Saturday, August 29, 2015, in Overland Park. He was born on June 13, 1933 in Provo, Utah to Argyle Evans and Pearl Francom.
He married JoAnn Berrey on December 22, 1951 in Provo, Utah: they have been married for 63 years. They were blessed with 6 children; Sally, Susan, Michael, David, Patrick, and Russell. They have 12 grandchildren and 10 great-grandchildren.
Boyd joined the Plumbers Union in Utah and became a Master Plumber.  He worked for several contractors and suppliers before starting his own mechanical contracting business in 1970 in Overland Park.  He built a successful business that he owned and operated until his retirement in 2002.  He enjoyed gardening, travel, service in his church, and spending time with JoAnn and their family.
He is survived by his wife JoAnn, children, grandchildren and great-grandchildren.  He is preceded in death by his parents, his brother JC, and his daughter Susan.
Funeral services will be held on Friday, September 4, 2015 at 11:00 a.m. at the Church of Jesus Christ of Latter-day Saints, 7100 Hadley Street, Overland Park.  Visitation on Thursday, September 3, 2015 from 6:30 – 8:30 p.m. at Overland Park Funeral Chapel at 8201 Metcalf Avenue.  An additional visitation will be held Friday morning from 9:30 – 10:30 a.m. at the LDS Chapel prior to funeral services.  Interment will be at Johnson County Funeral Chapel and Memorial Gardens in Overland Park, 11200 Metcalf Avenue.
In lieu of flowers, donations may be made to The Church of Jesus Christ of Latter-day Saints Humanitarian Fund.

To order memorial trees or send flowers to the family in memory of Boyd Evans, please visit our flower store.