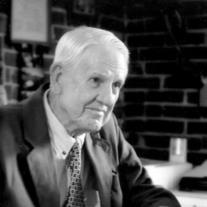 Beverly Helm Platt passed away at home surrounded by his loving sons on November 19th 2015. Beverly was born to his proud parents, Ernest C. Platt and Adele E. Platt, on February 16, 1919.  They came from pioneer stock who helped in the development of Kansas City.  He graduated from Westport High School followed by attending Kansas City Junior College. Compelled for more education he traveled ‘East’ to Columbia to attend the University of Missouri. He became a member of Sigma Alpha Epsilon and graduated with a BS in Business Administration. He held a variety of jobs during and after the war however his business career began to excel when he founded Westport Floor Covering which he ran for 52 years.

In 1947 he married Virlea MacLaughlin and together they raised 3 sons. He served on numerous civic organizations including The Native Sons, Westport Historical Society, Westport Improvement Association, and the Broadway Westport Council. He was a member of Mission Hills Country Club and the Vanguard Club.

He may have been best known as a founder of the Jolly Boys Outdoor Times Club, a group that enjoyed fishing and card playing.

Bev was instrumental in the creation of Pioneer Park at Westport Road and Broadway. He helped raise money for the project and coordinated the design and production of the statue of McCoy, Majors and Bridger which is a landmark in Westport.

In 1977 he married Alice Sebree Crooks, whom he affectionately called “Sweet Alice”. They were married for 35 years. Having a strong family tradition, they encouraged all the children to gather every Sunday night for dinner.

His infectious good humor and genuine love of and interest in his friends made him a welcome addition to any group.

Funeral will be held at St. Andrew’s Episcopal Church, Meyer Boulevard and Wornall  at 2 PM Friday November 27 th.  A grave side service will follow at Forest Hill Cemetery.


To order memorial trees or send flowers to the family in memory of Beverly Platt, please visit our flower store.