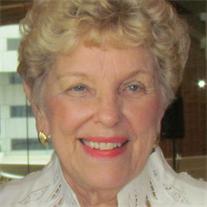 Barbara Ann Holm Wetzler, 73, of Overland Park, Kansas passed away on December 7, 2012 in her home surrounded by her family and friends. She finally was able to beat the hideous ocular melanoma cells that invaded her body more than six years ago by soaring away from them. Barbara was born on November 5, 1939 in Hays, Kansas, to Eugene and Louise Holm. Her family moved to Prairie Village, Kansas in 1953 and she attended Prairie Grade School and graduated from Shawnee Mission High School (now Shawnee Mission North). She attended the University of Kansas where she was a member of Chi Omega sorority and Mortar Board. She earned a degree in Physical Therapy. While attending the KU, she met the love of her life, Charles E. Wetzler. They were married in September of 1961 and shared their lives together for over 51 years. Initially Barbara worked as a physical therapist and helped Charlie complete his law degree also at the University of Kansas. During the next decades they raised three children and Barbara worked tirelessly in the community in many capacities. Although she was a member of many organizations and clubs and received many awards, her real interest was helping people at the grass roots level by providing food for the needy; tending a garden for other`s to enjoy or her healing touch. Public recognition was not important to her. She also had a great love for the family pet, which was usually a dog. All who knew her could easily see that her greatest passions were her faith in God, her family, supporting her husband in his career, and helping others. Her favorite times were family vacations in Colorado and Arizona and family cruises to Alaska, and the Caribbean and Mediterranean seas. However, her most special trips were taking grandchildren, Sam and Sophie, to Disney World.
In mid-life, she obtained a Masters Degree in Special Education also at the University of Kansas. By combining her two degrees, she was able to assist and encourage the physically impaired children, first in the Kansas City, Kansas School District and then in the Shawnee Mission School District. Many young students received assistance and comfort from her healing touch. With colleagues at Claude Huyck School, she started Wheels for Freedom, a nonprofit organization whose purpose was to provide motorized wheel chairs for needy and physically impaired children. She was a member of the Junior League of Wyandotte and Johnson Counties where she acquired training and encouragement to create projects in the community. At Saint Michael and All Angels Episcopal Church, she taught Sunday school; served on the altar guild; helped establish and maintain the church garden through the Gardening Angels; did outreach ministries and served on the church Vestry. Her friends made through her church were her closest lifelong friends and provided her inspiration and support during her life`s journey.
The last three years of her life were consumed with many trips to the Thomas Jefferson Hospital in Philadelphia, Pennsylvania where she participated in clinical trials to cure her disease; to Hutchinson, Kansas to participate in a trial drug program and to the University of Kansas Cancer Institute for radiation and consultation. She accepted these treatments and the interruption to her life with dignity and grace and without complaint. Her treatments allowed her to participate in her 50th wedding anniversary, the marriage of her daughter, Molly, and many family trips and gatherings. Her participation in these trials will also benefit others who have this dreaded disease.
Barbara was preceded in death by her father, Eugene V. Holm and her mother, Louise Holm. She leaves behind her husband, Charles of Overland Park, Kansas; her son, David Wetzler (wife Lisa), and grandchildren, Sam and Sophie, of Prairie Village, Kansas; her son, Brad (wife Andrea), of Santa Fe, New Mexico; her daughter, Molly Ann (husband Jim), and granddaughter Allie of Phoenix, Arizona; her brother, Ken Holm (wife Nancy), of Prairie Village, Kansas; her brother, Steven Holm, of Deming, New Mexico; her daughter-in-law, Dianna Delling of Santa Fe, New Mexico. Barbara will always be remembered by her family and friends for her beautiful smile and her willingness to always lend a hand.
A visitation will be held on Wednesday, December 12, 2012 from 5:00 PM until 7:00 PM at St. Michael and All Angels Episcopal Church, 6630 Nall Avenue, Mission, Kansas. Funeral services will be conducted at 11:00 AM in the church followed by a reception in the parish hall.
In lieu of flowers, the family requests that a donation be made in Barbara's name to any of the following: St. Michael and All Angels Foundation for Outreach, 6630 Nall Avenue, Mission, KS 66202; KU Cancer Center, Melanoma Research Fund, 2330 Shawnee Mission Parkway, Westwood, KS 66205; Thomas Jefferson University, with notation showing that it is for the Kimmel Cancer Center Uveal Melanoma Research Fund, 233 South 10th Street, Suite 310, Philadelphia, PA 19107 or you can donate online at http://www.kimmelcancercenter.org/kcc/kccnew/help/development/waystogift.htm.
Fond memories and condolences for the family may be left at www.overlandparkchapel.com
(Arrangements by D.W. Newcomer's Sons Overland Park Chapel, 8201 Metcalf Ave., Overland Park, KS 66204, 913-648-6224)
To order memorial trees or send flowers to the family in memory of Mrs. Barbara Wetzler, please visit our flower store.