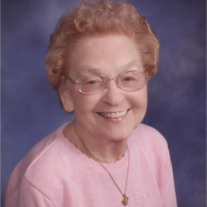 Audrey A. Hill, 90, died from heart failure on April 6, 2016.  Audrey was born in Montana and was sent as a small child on the railroad to Atchison, KS where she was adopted by the Sprong family of in the early 1930’s.
Audrey attended Potter Elementary and High School and then attended Mount Saint Scholastica in Atchison, KS where she received training to be an elementary school teacher.  She taught at Major Hudson Elementary School in the early 1950’s and while getting continuing education at the University of Kansas, was introduced to Everett Hill.
In her youth, Audrey could be heard singing on the local Atchison Country Music station on most Saturday nights and had a loyal following.
They were married on June 1, 1953 and moved to Kansas City and she continued to teach until 1957 when they adopted their son Michael.  At that time, she retired to be a full-time mother, homemaker, volunteer.  In 1965, they adopted a second son, Patrick.
Audrey was a 50-year member of Cure of Ars Parish in Overland Park and volunteered her talents as a singer to the Cure of Ars choir for most of those years.  She also volunteered as a Cub Scout Den Mother, provided meals to shut-ins, and at the Cure of Ars library.
During her life, she showed great patience, love, and encouragement to all.  This extended well into her last years at the Forum of Overland Park where she encouraged others in their recovery efforts.
Audrey is survived by her sons, Deacon Michael (Virginia) Hill of Kansas City, KS, Patrick (Carolyn) Hill and grandson, Grayson all of Blauvelt, NY.
The family would like to offer special thanks to Dr. Neal Erickson, his staff, and everyone at The Forum of Overland Park who helped her through the years.
Visitation for family and acquaintances will be at the Overland Park Funeral Chapel 8201 Metcalf in Overland Park on Sunday from 4:00 until 6:00.  The Rosary will be offered for Audrey beginning at 5:30.
The Mass of Christian Burial will be at Cure of Ars Catholic Church, 9401 Mission Rd, on Monday at 10:00 AM.
Interment will be next to her husband Everett, as she wished, at Resurrection Cemetery.
Donations in Audrey’s memory may be made to Cure of Ars.

To order memorial trees or send flowers to the family in memory of Audrey Hill, please visit our flower store.