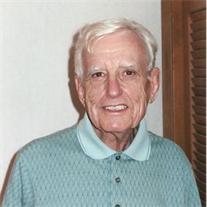 Arthur G. McLoughlin
Art died peacefully August 17, 2013 at the age of 90 with his family by his side.
Born July 26, 1923 in Kansas City, Kansas to Charles and Gertrude York McLoughlin, Art graduated from Southeast High School in Kansas City, MO in 1941, then enlisted in the Army in 1942 in the darkest days of WWII. He served for three years in the Southwest Pacific Theater including Australia, the Philippines, Biak, New Guinea and other islands as a radar technician. After the war Art returned to Kansas City where he married Virginia Patch in 1949. Art graduated from The University of Kansas in 1954 with a Bachelor of Science in Engineering Geology and worked for the US Army Corps of Engineers as project geologist - notably for the Pomme de Terre and Truman dams. Later he traveled throughout the West and Midwest for the Office of Surface Mining. Art and Virginia lived in Prairie Village, KS for 46 years, before moving to the Forum in Overland Park in 2009.
He was a member of Stewart Methodist Church, the Association of Engineering Geologists, and was an avid catch and release fly fisherman who took pride in tying his own flies.
He was preceded in death by his parents and two brothers and a sister.
Art is survived by Virginia and their son Mark, of San Francisco.
A memorial service will be held on Tuesday, August 20th, 1:30 PM, at D.W. Newcomer's Sons Overland Park Chapel. In lieu of flowers the family suggests a donation to the SPCA in recognition of Art's love of dogs, https://secure3.convio.net/hlspca/site/Donation2?idb=1986931679&df_id=1180&1180.donation=form1&JServSessionIdr004=g52w4xc2m2.app340a
To order memorial trees or send flowers to the family in memory of Mr. Arthur McLoughlin, please visit our flower store.