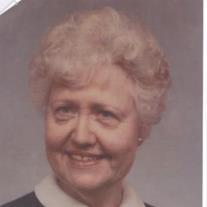 Anita Wilson Kodas died peacefully Monday morning, April 15, surrounded by her family, at Villa St. Francis in Olathe, KS, a community she loved during the five years she lived there. She was five-days shy of her 88th birthday.

Anita was born in Kansas City, MO on April 20, 1925, to Fern and Percy Wilson. She attended Paseo High School and enjoyed helping to put together her high school class reunions and visiting friends from her childhood.

After World War II she married Ralph Polson, of Garrettsville, Ohio, and lived there until returning to Kansas City in 1951. Her family built a house in Leawood, KS, and she worked at Roddis Lumber Company, the Bendix Corporation, and as a court reporter in Kansas City, MO.

In 1960 she married Melvin Kodas and moved to a farm in Tonganoxie, KS, but the family moved back to the Kansas City area in 1963. After the last of her children finished high school, Anita returned to college herself, earning a degree in computer programming from Johnson County Community College in 1982. After graduation she worked at the Boy Scouts of America until her retirement.

Anita enjoyed travel, touring extensively in New England, Europe, Mexico and New Zealand. At home she doted on several dogs and cats, and was an avid reader. She drew her greatest joy, however, from her sons and their children, whom she visited often.

She was pre-deceased by her parents and Jack Polson.